So I showed this article to Bret around 2 weeks ago just to get his thoughts.  I was pleased that he found it fair and objective.
At the time, I didn’t want to post it, as I would prefer to not get into Dueling Coaches if you will.  But I’ll hope this brings out positive dialogue and some of the things behind best practice decision making.  I can at least explain why I’m answering some of these questions the way I do.
The reader’s questions are in italics, and my responses are in bold. 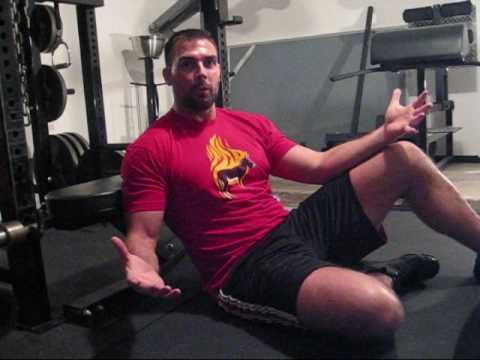 He said it was okay. I swear.

Thanks to the writing of Bret Contreras, there’s been more attention than ever being paid to what he calls the Hip Thrust (I believe Coach Boyle prefers referring to it as the Hip Lift). Regardless of nomenclature, I’d be curious where you see this fitting into the overall scheme of things when it comes to programming and fulfilling specific needs and achieving realistic stated goals. I also want to preface my comments to follow by noting that I respect Bret very much, so the intention of this e-mail is not at all to take shots at him, but rather to solicit the educated opinion of someone who possesses such an encyclopedic knowledge of the human body and how it functions during movement, under various forces, etc.

I think the move has integrity. We can start there. I think when you look at any conditioning exercise, it must meet the principles of the Joint by Joint Theory, and it does that.
The debt of the technique is that it has a very primitive stability acquisition. By this I mean stability is gained from contact with the floor with the trunk. Primitive patterns progress through feet, hands, knees, and elbows. In this case, there is tremendous stability gained from the t-spine in contact with the mat. This doesn’t equate to bad or totally inefficient, but I have some skepticism in developing awesome strength in a position that relies so much on trunk contact as a base of support. Can that strength automatically be translated to hip extension when you have to control the t-spine and trunk? I’m not sure.
My thoughts are to complement the upright posterior chain lifts, not replace them. I would put the hip lift in the category of GHR, 45 degree Hyper and Reverse Hyper.

Bret seems to think that if you’re not eventually loading these up significantly, then you’re probably leaving a lot on the table regardless of your goals (aesthetic or performance-based). I’ve also seen him mention that this movement should be on a 1:1 ratio with your numbers in the raw full back squat.Additionally I have seen him propose an explosive glute bridge where the barbell seems to be projected into the air off of the hips before being absorbed during the subsequent descent (even with a bar pad, this still gave my pelvis nightmares, but perhaps the movement used as such just takes some getting used to).

I would defer to Bret in projecting %ages vs. the back squat. It sounds fair.
I would also try out the movement with the sissy pad before passing judgement. I’ve never done it, but I know it looks bad. It may not feel like anything though.

Basically I am wondering where you’d rate these movements and their variants in terms of relative importance and value. Clearly there can be benefit from exploring uncharted exercise territory, so long as technique is spot on, but up until now I had always viewed these as rather ancillary pieces of the puzzle, and as such never got aggressive with attempting to load them up. On the other hand, Bret appears to feature these types of exercises in a much more prominent (albeit it still secondary) role with greater implications than I would seem to recognize at present time.

I think loading them up should not be ignored. If you can do anything heavier, that is simply a better approach if it is a conditioning exercise. Corrective exercise probably doesn’t share that approach, but these moves are not corrective in my opinion.
If, and I am not quite sure if this is accurate, Bret’s suggestion of importance of these moves are based on Glute or other posterior chain EMG, I think we should take caution in hitching to that wagon alone. Bigger glute EMG may be accompanied by less EMG elsewhere, and with the GRF from the t-spine, the big glutes may not be relevant when the more functional expression requires less ground-based support.

With respect to his 1:1 ratio comment, I was wondering how this would compare with someone who can deadlift a house with excellent form but has never made use of the externally-loaded hip thrust/lift before.  I was always of the mind that if you move very well and can deadlift big numbers, then quality function will likely not be a major problem for you.

If you hold a gun to my head, I would agree.
But if enough folks jump 40 lbs in their DL from these moves, it can’t be ignored.
I just don’t see it at this time.

I’d also be interested if you have any thoughts regarding the explosive glute bridge that projects the barbell in the air. Here is a video clip of Bret performing the movement.

I would only use this move if I didn’t have bands or chains to slow the bar down at the top. Dynamic Effort movements such as this are about the load at the bottom. Bands and chains load up at the top when the move is typically easier. I would prefer those choices with great rate of force development rather than pop the bar off the body and have it seemingly crash down. But like I said before, I’d want to feel it out for myself before totally passing judgement.

Quality stuff, Charlie. And above all, you present a phenomenal lesson on examining things with a critical, but ever-respectful eye. The mor people learning to take your approach, the better off ALL professions would be, as we share, learn, and grow together (sorry for sounding a bit hokey there).

Dan – I am flattered that I have been able to move you to the point of sounding a bit hokey. :-0

I very much appreciate your good words and hope you continue to find similar instances.

Hmmmm…..so this is a loaded bridging movement….not so sure of the value (for many….wrestlers and MMA folks sure!) of this versus other movements that could be done? Let me clarify that for some it is essential as it relates to bed mobility but for the athletic population??

To keep things from getting stale, OK, but curious why a supine movement when a quick look at motor development shows us humans try to get out of supine as soon a we can? Why not some kneeling or half kneeling stuff or some TGU type work??

In fairness, I have not used this with clients or personally….plan to try it a few times and see where my opinion heads….