We have a women’s hoops player that had bilateral 3 compartments worked on about 5 weeks ago. She just got cleared for jogging on soft surfaces every other day and to progress as we see fit.

And as far as strength training, I have started to incorporate some lateral work which she tolerates very well, and I want to start with loading her squats again as she has great technique, but again I just don’t know what is too much or not. 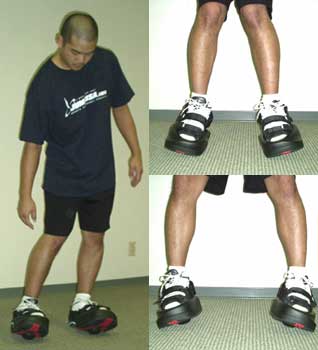 If it sounds like the same old story – FMS and SFMA, Upper- and Lower-Crossed, mobility and stability, it’s because I think that’s how things work. Everybody has the same patterns of banal limitations. It’s where the individual’s specific stiffnesses lie and the activity of choice that decides the what, where, and how of the expression of pain and injury.
If this young lady was a hockey player, I’d expect her to have groin pain. If she was an olympic lifter, I’d expect her to have back pain. If she was a softball player, I’d expect her to have shoulder, elbow, or hip pain. The protocol is based on the fundamental, and the proof to that is that these “chronic” problems only exists during or as a result of the specific activity, not because of a weak or limited body part.

I would look for a protocol no differently than an ankle sprain, a knee sprain, back pain. The same limitations that lead to these reactions have led this young lady to what I might assume to unnecessary surgery.

So the training program is whatever your A game is.
You go to plan B when you have pain or poor form.
There’s nothing to protect like a rotator cuff repair or a hip replacement. The protection is from running or whatever dumb repetitive activity she was doing. Make her into a monster, and it will probably take a long, long time for that to occur, before returning to running.
The best protocol you can give to her is 7 days a week of zero of whatever caused her pain in the first place.

“The best protocol you can give to her is 7 days a week of zero of whatever caused her pain in the first place.”

This is probably the best thing she could do and if she was a serious enough runner, probably one of the hardest she will ever have to do. I’ve encountered a fair share of PTs that would “feel bad” telling someone they can’t do somethign they like. I would feel worse when she needs another compartment release.